The following presentation was given by Sam Gregory at the 2013 WasteMINZ conference on 23 October 2013:

“Application of biochar to a soil contaminated with organochlorines and arsenic (As) from a past agricultural practice known as sheep dipping was analysed to investigate its effects on contaminant mobility and plant growth characteristics during a 180d glasshouse and field trial study. Soil from a known dip site was removed and treated with biochar made from a willow (Salix sp.) feedstock (pyrolysed at 350°C and 550°C) added at 20 t ha-1 and 40 t ha-1 to gauge the appropriate treatments to be used in a later field trial. Soil microbial activity as analysed using the dehydrogenase activity assay (DHA) was significantly increased (P<0.01) under all biochar amendments. After 60 d of amendment, biochar containing soils underwent > 100% increase in DHA resulting in significant decreases in alpha-HCH (10-fold) and gamma-HCH (3-fold) concentrations in soil. Significant reductions in DDT with biochar amendment were also noticed after 180 d of treatment compared to unamended soils. Biochar did not increase water-extractable arsenic concentrations but significantly (P<0.05) increased phytoextraction into both a arsenic hyperaccumulator fern (Pteris cretica) and ryegrass (Lolium perenne). Ryegrass growth was signifcantly increased (P<0.01) under biochar amendment with 2-fold increase in shoot dry weight and 3-fold increase in root dry weight after 180 d. These results have the potential to reduce the remediation time of contaminated soil and decrease the environmental risk to nearby ecosystems.”

Attachments: WasteMINZ 2013 Use of biochar for the sustainable remediation of sheep dip sites

If some of this is still too much for your rusty organic chemistry, I recommend checking out this… 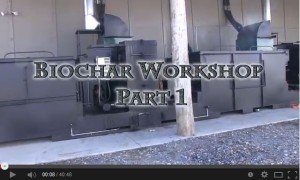 This biochar workshop delves deep into the many aspects of biochar production and application. Part 1 focuses on practical production techniques using ‘drum within drum’ retort. There may be some advantages for this over the TLUD system (ie, reduced supervision).

Part 4 takes a look at the triple Adam Retort system, installed by New England Biochar, that is the center piece for the site where the workshop is conducted.

A report that I worked on for the Washington Department of Ecology has now been published. Many thanks to Mark Fuchs at WDE for initiating this report on compost odor control, and for asking me to contribute a literature review of biochar use in compost and an appendix on the global history of biochar.

Here is a link to the study and the table of contents for the biochar sections. I hope this will be useful information for biochar producers and users.

This report was pushed to me via the google search engine so I guess that’s good news for biochar profiling in NZ.

Here’s a link to the 1st article… http://soilcarbon.org.nz/coal-solution-a-burning-issue/

Don can be contacted via ABE.

My disagreement with Albert Bates at the Permaculture Convergence last year was his contention that biochar could be a solution to global warming if we just planted enough trees and cut them for biochar. That disagreement touched a range of issues:

Because if we haven’t calculated ALL of that, and done so in a factual environment with good numbers for depletion rates and time scales, we could easily get part way through and find ourselves unable to complete the projects, effectively wasting all of the resources that go into them.

But now Rachel Smolker has added a piece that I did not think of at the time. Ecosystems and markets.

Those marginal lands are already filled with their own ecosystems; have we calculated the costs of converting thnem to biomass production and what sort of repalcements will we create? Will they be biodiverse enviromnents in a permaculture mould or will we be going flat out for carbon sequestration and create yet more monocultures designed to suck CO2?

But her main target is the problem of markets and their political power. IF biochar becomes either an enviromental necessity, or the big players can extract rents from their political cronies, we will see something similar to what is happening as described in Smolker’s document,

Bioenergy, a disaster for biodiversity,health and human rights.

Since humans first learned to manipulate fire, people have used local biomass—including wood, other plant matter, and dried animal dung—for heat and for cooking. Billions of people continue to do so. But now, in addition to these traditional uses there is an unprecedented push for large-scale industrial/commercial bioenergy.

Proponents refer to a new “bioeconomy” featuring massive biorefineries that take in millions of tons of plant biomass and convert them into all manner of energy and materials.

But two important questions are often overlooked in the rush toward bioenergy: Where will all that plant biomass come from, and what will the consequences be on ecosystems, wildlife, agriculture, human rights, climate, water, and soil?

At the moment I am making char out of trees that have to come down both to protect my neighbour’s house and to open up the amount of light that falls across the middle of the block. The longer term aim to to significantly increase the total amount of biomass being generated by the property in the form of an edible forest and to use the prunings as the source of biochar, compost and firewood – including a woodlot.

I’m prepared to make a case that replacing old, slower growing trees with many more younger, faster-growing ones is possibly net carbon negative if the old trees are properly handled but we also acknowledge that the energy cost of managing the place chainsaws, mulchers, the tractor, WWOOFERS will leave us carbon positive for most of the rest of our lives.

We are doing this because, on balance, we believe that working towards a more sustainable future is better than doing nothing and that some kind of permaculture model is better than anything else we have seen and biochar is a part of that thinking..

I would be saddened to see the biochar revolution being co-opted into the mania for fuel production and contributing to raising the price of biomass and hence the temptation to continue eating the good stuff to make a financial profit.

I’m not too sure about the title that the Nelson Mail came up with, but its great to see this article in the media. Lets hope its the start of many more. Thanks Don.

“In the first of a two-part series, Dr Don Graves profiles Biochar, a time-honoured method for improving soil fertility and mitigating climate change”

“… Many biochar-based substrates produced plants with shoot dry mass greater than or equal to the control. These results demonstrate the potential for biochar to replace perlite and eliminate the limestone amendment needed for commercial greenhouse soilless substrates based on sphagnum peat. Soilless substrates containing biochar as a replacement for perlite and limestone can successfully be used for greenhouse plant production.”

The full thesis can be accessed from here… http://lib.dr.iastate.edu/etd/13399/#