About a year ago I asked an incinerator maker to build me a TLUD based on a design I’d seen on YouTube. Yesterday it worked properly for the first time. 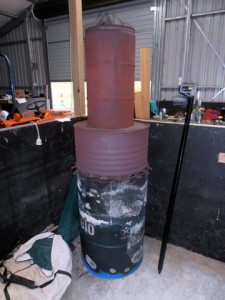 The main burner barrel has 50 x 25mm holes in the bottom and stands on 3 bricks during the burn. The middle section is half a 300 litre barrel afterburner with a series of tabs cut in the lower edge. Tabs are alternately turned inwards and outwards. They both support and stabilise the afterburner and allow secondary air into the chamber. The flue is a 50 litre oil drum punched through; probably a bit too short and wide but it appears to do the job.

When I first tried it I used cryptomeria that had been through a mulcher and failed completely. Although cryptomeria is full of volatiles and should burn well, the chip size was too small and simply choked the fire. About a year ago we had a pile of old pine trees cut down and mostly chipped into pieces 10-25mm and now we have several large piles of chip awaiting use.

At the end of summer I had as much of the driest material as I could put into trays made of old freight pallets and stacked in the barn until the weather changed and the fire bans disappeared. 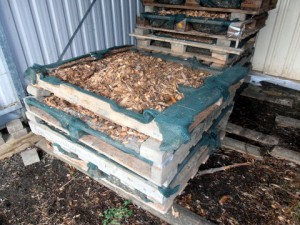 Yesterday, with the help of my mate Simon Coughlan, I filled the TLUD and set it off again. This time the burn was nearly perfect. It was smokeless from almost the first moment and 2 hours later the first of the embers started to fall through the air holes in the bottom so I doused it with about 50 litres of water.