I’m a bit slow to report on this but it was a great success. We had folk from Taupo to Kaitia but mostly local to Pukekohe and the Auckland area. Cam’s farm was a great venue and the weather was kind. Cam became the recipient of a few 100 litres of mainly maize cob char. This local seasonal biomass (from maize seed production) makes for a reliable and fast burn in a TLUD. Maybe too fast in some cases, as we found that the after-burner can be overwhelmed by volatile gases, leading to visible smoke. We played with restricting primary air but a larger (full drum) after-burner volume may be the best solution. Mixing the cob with wood-chip was also explored. 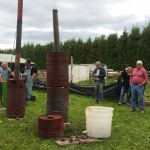 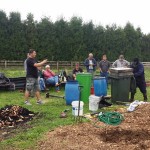 Graham (aka ‘the carbon knight’) shakes his boules at lumpy char 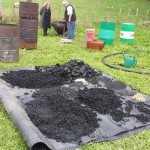 Cam promises to give feed-back from the garden

TLUD’s where provided by our host, Cam smith, Simon Day, Brian Richards and Graham Smith (the nearest thing we have to a professional biochar maker). Brian also demonstrated the TFOD via an inverted commercial range hood. This worked very well on the paulownia wood that he also provided.

I hope that more of these events spring up around the country. It would be good to have local horticulture and farming groups involved in the future. They are not difficult to organise and help open eyes on the potential for biochar in it many pathways to the soil.

My thanks to Ron Serber from Earthwhile and the Auckland Permaculture Workshop who proved the linked photos of the day.