I had an epiphany while running a comparison between a couple of TLUDS at Simon Days about 10 days ago. I’ve been trying to get more char out of my system by raising the afterburner about 50mm above the main barrel so I can feed in extra wood through the secondary air inlet after the burn stabilises.

While the secondary feedstock has been charring well, the main charge has been producing too much torrified and untouched chip. I suddenly realise that, by raising the afterburner I was destroying the draft created by it and the flue because the extra gap meant that the flue was not drawing any air through the bottom of the barrel, the secondary air inlet was the path of least resistance.

I reverted to the original configuration, with the afterburner sitting firmly on the top of the barrel and the previous good performance of the system returned with less than 15% brands.

Then, greedy for more product, I tried removing the afterburner during the burn and adding a small pile of branches up to 50mm in diameter. At first I thought I had broken the system with huge amounts of mostly white smoke billowing out and no chance that the afterburner would relight to combust the smoke. However, I realised that the fire front, about half way down the barrel, was proceeding as normal, the draw from the flue was still working at that level.

Next option was to remove the afterburner again and add some dried cryptomeria foliage, my favourite fire starter in all cases. I quickly had the smoke burning again and the temperature of the afterburner rose to a self-sustaining level and the burn proceeded as normal.

The extra wood charred very well, all the way through, with very little smell and a nice crisp snap on breaking. Final composition was fully charred with no more than 15% brands and possibly less.

Next time I will try to double the extra fuel and/or add in some road kill to add calcium char as well.

Another run today, (February 14) adding about 10 litres of various sized branches around 30cm long and between 10mm and 30mm diameter.

Once again we had trouble reigniting the afterburner, the moderate breeze that sprang up during the burn didn’t help, blowing out several matches while the barrel smoked liked fury. once I got a bunch of cryptomeria actually burning I still had to hold the afterburner partially open for a couple of minutes to keep the flame burning really hot and bring the afterburner up to temperature to ignite the pyrolised gases.

After that it settled quickly and burned normally till the end with about 10% unburned material as usual. The results of the extra feedstock were spectacular. All of the extra wood was almost perfectly charred, snapped cleanly and had very little to no smell. All of it looked like this 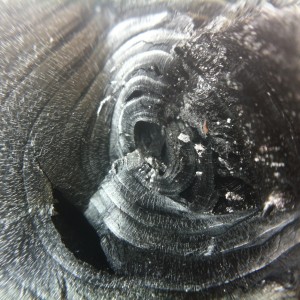 30mm branch added to TLUD after the burn had established at about one third of the way through the burn.

Next time I will just take off the flue and add the extra wood through the top of the afterburner. We wont be able to control the distribution on the top of the chips but I’m not expecting that to make any great difference; the space is very hot and anoxic, as this material demonstrates perfectly.